As I’m now down to the last 64 blogs, I thought it would be a good point to do a penultimate stats check before my final analysis. I’m going to show a series of snapshots including a map of world coverage and top performing blogs.

So let me jump right to it – looking at the web version of the performance indicators the image that jumped out at me was the world map below.

As you can see, there are many countries I haven’t reached but I was shocked at the spread of the countries that the blog has touched. My counting suggested I’ve had readers (or at least people clicking onto the site) in 85 countries including Guadelope, Barbados and Sudan. I’m delighted with this as it means people in 85 countries seeing and engaging with the word ‘myasthenia’.

The top end of the 15 countries with the most engagement is not surprising, however I was delighted to see Malaysia, India and Mexico on the list. Once again it puts my language skills to shame that people from these countries can engage with my story. 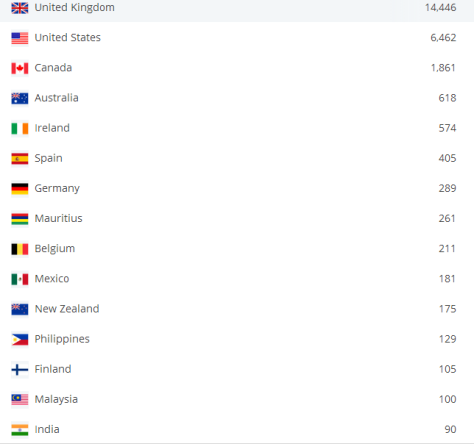 In terms of the top performing content, it was a mixed bag with a couple of posts about the thymectomy and recovery from it, the diet post, the vaccine post and of course the sex post which I had so much angst posting. I was glad to see the A-Z of myasthenia sneaking in there too. As always, if there is a subject I haven’t written about and you’re interested in it comment below and I’ll do my best.

Overall, I’m absolutely delighted with how the blog has performed. I would never have dreamed of reaching more than 7,600 people.

Looking at the monthly breakdown, I was delighted to see that October was my best month so far closely followed by September.

The average posts per visitor for October was particularly pleasing – suggests a low bounce rate (people coming on to the site and immediately leaving again). However, the fact that I only posted 23 blogs last month is testament up how busy it was workwise and how tired I was. It has left me with quite a number to catch up on before the end of the year.