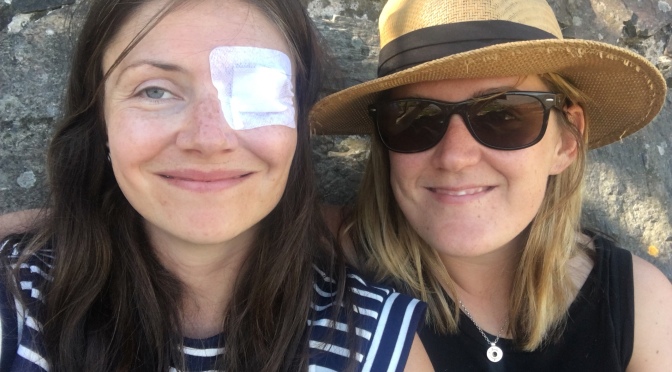 As I mentioned in my last blog, I had a relapse of double vision when in Uruguay in February. Before jumping to the treatment I received in Argentina, I want to talk about the experience I had with the travel insurance provider.

Ever since being diagnosed with myasthenia gravis, I have been particularly careful when choosing a travel insurance policy. I felt it was inevitable that one day I would need to use it and that time finally came in Buenos Aires last week.

Before calling the insurance company, I used the online doctor service that was included. It was literally a video chat with a British doctor who confirmed I should go to a medical facility to see a neurology specialist ASAP. So I phoned my travel insurance with her recommendation to check if there were any facilities that they would recommend, stressing that it was important for me that they could cater for English-speaking patients.

I hoped that it would be a quick call to the travel insurance just to get a recommendation, but I spent the next three hours having an on and off conversation with one of their staff.

After a long initial conversation about my condition and what the doctor had recommended, the assistant went away and then emailed me over an hour later with a list of rheumatologists in the city although I had told him that the doctor had recommended a neurologist. In the email, he also said I needed to phone each of them to see if they had English-speaking doctors.

When I phoned him back to tell him no I needed an English speaking neurologist, he told me I should consider seeing a rheumatologist instead…as if he had had a brainwave about treating the whole condition. Only after I was quite firm with him, did he eventually agree to look at neurologists. He then again emailed a google search of neurologists without any information about whether they spoke English but also said I should think about his rheumatologist point. Never in my years of having the condition, have I ever had a rheumatologist recommended and, from a quick check on the MG Facebook support groups, it’s incredibly rare that someone would see this type of specialist if they only have MG.

All the time we were having this back and forth ‘discussion’, I was in my darkened hotel room feeling my energy levels – which were at this point already very low – dropping. But there was no sense of any concern whatsoever from the insurance company assistant.

When we were on the way to the hospital I had found with English speaking doctors and staff, he called again to say that unless I had declared the condition I wouldn’t get any treatment paid for. Hardly the right time to bring this detail up! Of course I had declared it and paid the excess, which earlier I assumed he had seen on my file rather than adding stress to an already unpleasant situation after three hours of terrible service.

All in all, it was an utterly frustrating experience that seemed to lack in any kind of empathy. I know most people will not be shocked by this, but I do wonder why we allow an industry that is meant to be providing us a specific service to be so inept when we are at our most vulnerable? There is definitely a business opportunity for a kinder travel insurance company, or even a customer service team who ask callers once how they are doing.

I have now submitted my claim, so I look forward to seeing how that goes but I’ll be doing a bit more research about other providers the next time I take a trip.